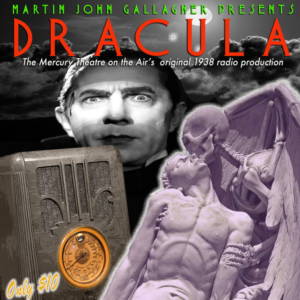 We offer you a special Halloween treat — WRW’s Dracula, recorded live in 2002! One of our favorite productions, sharing is a small way to celebrate our 20th anniversary. Hopefully we’ll see you again live soon, until then we remain, obediently yours.

Sam A Mowry and the whole cast and crew

If you missed the audio, please be sure to check out the script!

Good news for lovers of the audio form. KZME 107.1 FM in Gresham, Oregon has begun broadcasting a new program

dedicated to the spoken word and audio storytelling. It’s called the Society of the Inner Ear and it airs Sundays at 2pm pst and features the work of not only the Willamette Radio Workshop, but Dry Smoke and Whispers, Afterhell and Ollin Productions and a wide variety of both old and new programs. TSotIE will be a cornucopia of different style, genres and experiments and I’m sure there will be something to tickle your imagination and while away a Sunday afternoon or two. The program began with an homage to the masters of audio mirth, The Firesign Theater. A nice dedication to a group that inspired all of us involved and timely tribute with the passing of Peter Bergman.

This weeks show begins an 8 week cycle where the members of the Society will each produce 2 shows to share with the listening audience what we like and what you can expect from us. Tomorrows shop (April 15th, 2012) has Marc Rose and me (Sam A. Mowry) sharing the works of Stan Freberg, Ken Nordine, Monty Python and show casing one of our favorite collaborations, Archibald MacLeish’s Fall of the City. A nice combination of funny and touching, timely and dramatic. Along the way Marc and I chat about how these various and disparate folks helped shape our love for audio and influence our work even today. I hope you can tune in, you can also stream it here:

Listen to the KZME Stream HERE.

There will be lots of wonderful work coming in the following weeks and please feel free to “Like” us on Facebook:

Or drop us a line at:

We would love to hear what you think and what you might like to hear in the future. Turn on your radios and search for sound!

Late night surprise for WRW fans. Turnstiles, the Shadow and the Outsider all on tonight on Radio Theater Round Up on KBOO 90.7 fm and streaming online. Enjoy! 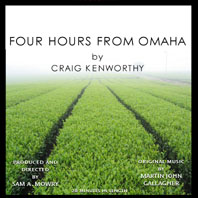 The Willamette Radio Workshopâ€™s production of Four Hours From Omaha by Craig Kenworthy is a play developed by the Writers on the Air Workshop, Cynthia J. McGean Director. We were happy to have our initial broadcast of Stage and Studio on KBOO 90.7 FM April 18th, 2006. Craig Kenworthy is a writer who resides in Montana. His works have been seen and heard in many venues across the country. The script has gone through a couple of reading and re-write sessions to get to today’s finished product. We were actually lucky enough to have Craig visit us at WRWâ€™s studio for the final reading before we went into the studio. WRW is always happy to work with writers on both adaptaions and original projects, but there is always a special spark when we help usher a new work into the world, especially one as fine as Four Hours From Omaha.

The production was directed by Sam A. Mowry and starred Kate Hawkes, Brian Bartley, Carole Dane, Jane Bennett and Cindy McGean. Original music was composed by Martin John Gallagher. This is the first in a series of new works sponsored in part by the Regional Arts and Culture Council of Oregon. Our special thanks to Dmae Roberts and Stage & Studio for premiering this work.

Fall of the City
by Archibald MacLeish
October 25th, 2004

Broadcast on WMNF in Tampa, FL, the broadcast was also streamed at their website.

Fall of the City is a seminal piece of radio theater, originally presented in 1937 by the Columbia Workshop, with a cast of 200, including Orson Welles, Burgess Meredith and Paul Stewart. As The Fall of the City begins, a dead woman who has appeared in the town square for 3 days saying nothing finally speaks and she tells of the arrival of a mysterious conqueror, warning “The city of Masterless men will take a master, there will be shouting then, blood after.”

A debate ensues where the people must decide how much of their freedom they are willing to risk for a sense of security from a mysterious conqueror. The Fall of the City is a wonderful radio piece, speaking directly to the issues and political choices we face today. The timeless power of poetry and the spoken word meet in this verse drama written especially for radio by this Pulitzer Prize-winning author.

The timely nature of this story inspired us to re-imagine the piece, using the entire script and a brilliant modern sound design by Marc Rose we feel this is our best work to date. Watch for more MacLeish to follow next year.

Fall of the City was recorded at PCC Sylvainia in Portland, OR.

In loving memory of Dick Mowry

Fall of the City is a copyrighted work produced with the permission of the Estate of Archibald MacLeish.

Hiro & Liling is inspired by Japanese folklore, this original love story by Kristina Armetta unfolds as an old man teaches his grandchild the legend of an ancient rock formation. In Armetta’s simple, lyrical language the grandfather traces the relationship between a war-hardened Japanese General and a young Chinese girl orphaned by his troops. At once poignant and hopeful, potent and reflective, the piece represents some of the best work to come out of WRW’s 2004 Writers On-the-air Workshop.

The Writers on the Air Workshop is directed by Cynthia McGean

Special Thanks: KBOO, broadcast at 90.7 on your FM dial and is simulcast over the World Wide Web at http://www.kboo.fm/index.php.

Call of the Mummy, by Cynthia J. McGean

Thousands of years ago, a secret was buried deep beneath the sands of Egypt – the secret of eternal youth. Now, Dr. Clyde Evans seeks to unearth that secret. His expedition will travel to the deadly River of Souls in search of the legendary tomb of Imhotep. In his unnatural quest, Dr. Evans will risk
not only himself, but the lives of his friend, Reginald Bonhoffer, and his financier, the beautiful Victoria Neeferts. They have the hunger for knowledge, but do they have the strength to resist The Call of the Mummy?