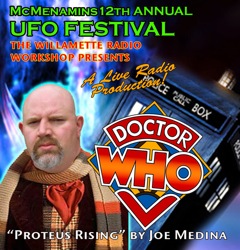 Deep in outer space, far in the future, an alien artifact lures a mad scientist and a band of extremists to an asteroid.Â  And their battle for the artifact unleashes a monstrous evil.Â  Now the only hope for the human race — for the galaxy — is a mysterious alien wanderer.Â  He has had many faces, many names.Â  But he’s known best as… the Doctor.Â Â  And he could really use a cup of tea.

Matties Room (on the 2nd floor)

WRW is happy to once again join the UFO Festival for the 8th year. This year’s show brings Joseph Medinaâ€™s (whose rendition of The Thing at a previous UFO Fest was chilling) amazing continuation of the Doctor Who saga. With an original score by James Dineen, live Foley by David Ian and Dino de AElfweald (with assistance from Toni Lima and Amy Branson) as well as live sound from D. Neil Blake, Robert Kowal and the otherworldly audio assistance of Marc Rose.

Our special thanks go out to Claudine Knapp and Martin John Gallagher, our Resident Sound Designer and all round swell guy.

2011 marks our 10th anniversary, starting with a late night War of the Worlds for Halloween. Thanks for listening!Â  We are and have been having a blast.