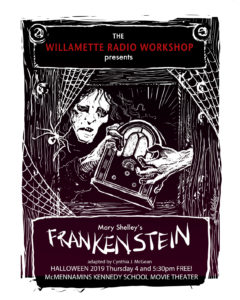 COST: All shows are free and open to all ages. (The subject matter may be unsettling to younger children)

Sound Design by Marc Rose and Sam A. Mowry

Directed by Sam A. Mowry

Live radio lives! Once again the Willamette Radio Workshop presents it’s annual Halloween extravaganza. WRW presents Frankenstein, adapted by Cynthia McGean. This will be the full-blooded masterpiece. A tale of science and passion, creation and betrayal, love, loss and horror. A classic story in, dare I say it, the vein of Dracula (our legendary first Halloween project). The show is recorded live and chock full of Foley sound effects in the style of the Golden Age of Radio with a few modern touches for good measure. A Magic Lantern show will be presented by Joe Medina. This production won the Special Ogle Award.

All shows are free and open to all ages, the subject matter may be a little intense for younger listeners. Kennedy School hosts trick or treating for the kids starting at 4:30, especially helpful on rainy days.

Our Poster is by John Kholepp.