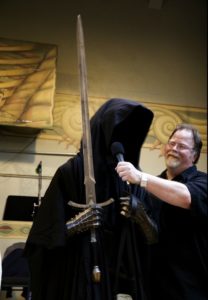 Elves, wizards, orcs and all others are invited to join in this all-day celebration of J.R.R. Tolkien, one of the 20th Century’s most influential authors. We’ll have live music, The Lord of the Rings on the big screen, Willamette Radio Workshop performing live, a costume contest, Hobbit-inspired food specials and more!

Schedule
The Lord of the Rings Trilogy
Follow Frodo through the epic series – in the Theater, 11 a.m. ‘til late 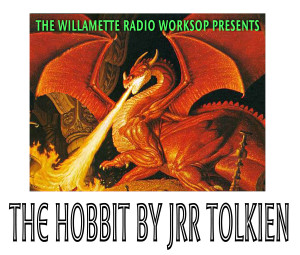 Come join the Willamette Radio Workshop as we make another journey to Middle-earth with “The Hobbit’s Greatest Hits” our one-of-a-kind adaptation of the J.R.R. Tolkien classic suitable for all ages. We start at the beginning and end at the end, but in between, the audience chooses what order we tell the story (by picking numbers from the proverbial hat). The show is broken into two parts at 3pm and 5pm. The performance is set for Saturday, January 13th, at the McMenamin’s Kennedy School (5736 N.E. 33rd Ave.Portland, OR 97211), part of the annual J.R.R. Tolkien Birthday Celebration.
The costume contest is always a highlight and this year will be no different. Bring your finest Middle Earth inspired creations and join in the fun. Come on your own or bring a crew of your favorite characters for back up. The contest will start at 4:30, sign up with Jamie and Joe at the swag table, prizes will be awarded, laughter and merriment usually ensues. 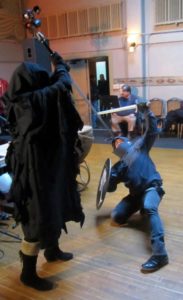 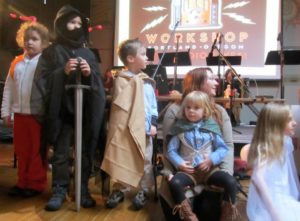 The performance is absolutely free, but remember: when you come to Middle-earth, you too may be called into service! We need your voices for the battle of the Five Armies and elsewhere , don’t worry, it won’t be 2 and a half hours long. 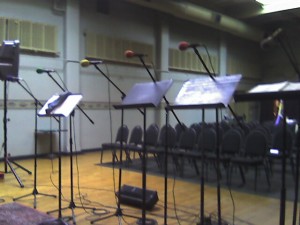 Our cast and crew include, but are not limited to,  Scott Jamieson, David Ian, Dino Deaelfweald, Cindy McGean, Atticus Mowry, David Loftus, Christopher Hart, Joe Medina, Jamie Lawson and Sam A. Mowry. Special thanks to Martin John Gallagher and Marc Rose for their sonic enhancements.
Come grab a beer and some pizza and enjoy the unique experience of live radio and the timeless tale of The Hobbit.
“May the hair on your toes never fall out!”

About J.R.R. Tolkien
John Ronald Reuel Tolkien, CBE (born January 3, 1892, died September 2, 1973) was an English writer, poet, philologist, and university professor, best known as the author of the classic high fantasy works The Hobbit, The Lord of the Rings, and The Silmarillion.

He served as the Rawlinson and Bosworth Professor of Anglo-Saxon at Pembroke College, Oxford, from 1925 to 1945 and Merton Professor of English Language and Literature at Merton College, Oxford, from 1945 to 1959. He was at one time a close friend of C.S. Lewis – they were both members of the informal literary discussion group known as the Inklings. Tolkien was appointed a Commander of the Order of the British Empire by Queen Elizabeth II on 28 March 1972.

After Tolkien’s death, his son Christopher published a series of works based on his father’s extensive notes and unpublished manuscripts, including The Silmarillion. These, together with The Hobbit and The Lord of the Rings form a connected body of tales, poems, fictional histories, invented languages, and literary essays about a fantasy world called Arda, and Middle-Earth within it. Between 1951 and 1955, Tolkien applied the term “legendarium” to the larger part of these writings. While many other authors had published works of fantasy before Tolkien, the great success of The Hobbit and The Lord of the Rings led directly to a popular resurgence of the genre. This has caused Tolkien to be popularly identified as the “father” of modern fantasy literature – or, more precisely, of high fantasy.

In 2008, The Times of London ranked him sixth on a list of “The 50 Greatest British Writers Since 1945.” In 2009 Forbes ranked him the 5th top-earning deceased celebrity.