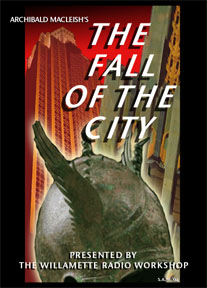 The Willamette Radio Workshop is excited to announce that they have been honored with the Crystal Communicator Award of Excellence for our production of The Fall of the City by Archibald MacLeish. Fall of the City is a seminal piece of Radio Theater, originally presented in 1937 by the Columbia Workshop, with a cast of 200, including Orson Welles, Burgess Meredith and Paul Stewart. As The Fall of the City begins, a dead woman who has appeared in the town square for 3 days saying nothing finally speaks and she tells of the arrival of a mysterious conqueror, warning “The city of Masterless men will take a master, there will be shouting then, blood after.”

A debate ensues where the people must decide how much of their freedom they are willing to risk for a sense of security from a mysterious conqueror. The Fall of the City is a wonderful radio piece, speaking directly to the issues and political choices we face today. The timeless power of poetry and the spoken word meet in this verse drama written especially for radio by this Pulitzer Prize-winning author.

The timely nature of this story inspired us to re-imagine the piece, using the entire script and a brilliant modern sound design by Marc Rose, we feel this is our best work to date.

Produced by Sam A. Mowry, Robert Kowal and Marc Rose

Co-Producer and dramaturgy by Cynthia McGean

The Fall of the City was recorded at PCC Sylvania in Portland, OR.

Special Thanks to Richard McAdoo of the Estate of Archibald Macleish and Margaret Howland from the Archibald MacLeish Collection at the Greenfield Community College Library.

The Fall of the City is a copyrighted work produced with the permission of the Estate of Archibald MacLeish.

The Workshop has scored two Ogle Awards at this years CONvergence Convention. Last year we won an Honorable mention for A Murder of Crows. This year we won the Gold for Heather Breeden’s Next Year’s Girl and a Special Award for best Adaptation for Cynthia McGean’s Mary Shelley’s Frankenstein, recorded live at McMenamins Kennedy School last Halloween.

We are busting our buttons to receive this honor and to be in the company of such wonderful audio producers is a great compliment. The full list of awards follows and the judges are listed at the end. Congratulations to Heather and Cindy especially for their wonderful scripts. I can’t wait to see what comes out of this years Writer’s on the Air Workshop.

The Ninth Annual Mark Time Awards for the Best Audio Science Fiction of the Year were presented at the CONvergence Science Fiction Convention at the Sheraton Hotel South in Bloomington, MN on July 1st, 2005.

The Mark Time Award is named after the character created by the Firesign Theatre in the 1970s. The Ogle Award is named for Charles Ogle, who played the Frankenstein monster in Thomas Edison’s 1910 film of the Mary Shelley novel. The Mark Time/Ogle Awards are the only awards given in this country that are solely for audio theater.

The winners of the Ogle Fantasy Audio Awards and Mark Time Science Fiction Audio Awards for the production year 2004:

Next Years Girl By Heather Breeden

The Menace From Earth

David Ossman described the genre at the first Mark Time Awards ceremony this way: “The best special effects are the ones inside your head. The best aliens are the ones that only you can see, and you only see them in your own mind. Science fiction is one of the largest genres in the whole world of audio publishing anyway, mostly because people love to listen to it. It’s movies in your mind.”

You can find more information about the CONvergence convention on-line at http://www.convergence-con.org/.

CONvergence is a project of MISFITS, the Minnesota Society For Interest in Science Fiction and Fantasy.

Judges for the 2004 Mark Time and Ogle Awards were:

The Willamette Radio Workshop is proud to announce that Cynthia McGean, the director of our Writers On the air Workshop, was awarded first place in the National Audio Theatre Festival 2004 Script contest for her piece Pandora’s Box. Set in a battered women’s shelter, Pandora’s Box explores a veteran shelter worker’s crisis of hope. First place includes the publication of the Script in NATF Script Book 2004, a scholarship to the NATF Audio Theatre Workshop in West Plains, Missouri and a cash award.

Ms. McGean’s adaptations and original scripts have frequently been featured in WRW’s season. A selection from Ms. McGean’s adaptation of The Island of Dr. Moreau will be highlighted during the April 22nd recording of OPB’s LiveWire radio show. The program is in conjunction with Wordstock and will be taped for broadcast on OPB TV.

Ms. McGean is a published writer whose work has been performed throughout the country. She has also worked onstage and backstage at a number of local theaters, is a longtime advocate for children’s rights and teaches third grade at Lot Whitcomb Elementary School in Milwaukie.

Lost in a Radio Studio, by Joy Jackson and Paul Feavel

Trial by Fire, by Joel Pierson

Winning scripts will be published in the annual NATF scriptbook, and may be considered for future production by NATF. The judges for this year’s contest were Jeffrey Adams, Icebox Radio Theater; Janine Preston, WKNH Radio Theatre, and Randy Story, NATF.

Willamette Radio Workshop is proud to announce that our resident Sound Designer, Marty Gallagher, has been awarded the Silver Medal for Sound Design for Mt. Hood Repertory Theater’s Fahrenheit 451 at this years World Stage Design competition in Toronto Canada. Check out the link for complete details about a very amazing competition.

More about Marty. Martin John Gallagher is an award-winning national musical director, computerized musical arranger and sound designer based in Portland, Oregon. He is a three-time Drammy winner, and a five-time nominee. He works in five Western states, and he’s worked with every significant theatre company in Portland. He designed the synthesizer programming for the Portland Opera’s recent production of View From a Bridge. This summer he musical directed Rogers & Hammerstein’s Cinderella for the City of Portland at Washington Park Rose Garden using computerized sequencing to simulate the pit band (and stay within budget). He is a featured presenter and writer for The United States Institute of Theatre Technology. He was a judge and keynote speaker for first ever Kennedy Center American College Theatre Festival sound design competition last year. Also, he has just released an interactive CD-ROM Wireless Microphones In the Theatre for Sound, Costume, Wig and Makeup Designers, and Production Coordinators. It is available directly from Mr. Gallagher. His educational web site about theatrical sound design is http://www.home.earthlink.net/~mjgallag.

Go and check this site out for a lot of good info concerning the business and mechanics of sound.

A Murder of Crows featured the original scripts of Cynthia McGean, Bill Gregory and Mary Robinette Kowal and was produced by Sam A. Mowry, Robert Kowal and Marty Gallagher.

The Ogle Award is given each year to honor the Best Fantasy Audio Production of the Year. The award is named for Charles Ogle who played the first Frankenstein’s creation in Edison’s silent 1910 film of the famous science fiction horror novel. Fantasy includes magical “high” fantasy, sword and sorcery, horror, modern urban fantasy, and other things that don’t fall under the criteria of Science Fiction. The Mark Time Award, and the Ogle Award, were awarded at CONvergence, July 2-3-4 of 2004.

The Mark Time Awards are the companion award to the Ogle and are given each year to honor the Best Science Fiction Audio Production on the Planet. This year Marc Rose and Jerrel McQuen also received an Honorable Mention for their series Dry Smoke and Whispers — The Shadow Man, also produced in Portland. Several members of both companies traveled to Minnesota to receive the awards, presented by David Ossman of the legendary Firesign Theater. The highlight of the opening ceremonies is an original audio theater piece written by Jerry Sterns and Brian Price called Martian Trombone. Due to an illness in the cast, Sam A. Mowry, WRW Artistic Director, was asked to step in at the last minute and performed with David Ossman and the CONvergence troupe.

Judges for the 2004 Awards are listed below.

The Mark Time Awards are sponsored by MISFITS, the Minnesota Society for Interest in Science Fiction and Fantasy. A complete list of winners can be found at: